I’m hosting The Lounge this week for our first “Freestyle” edition! No themes, no rules, just great people and fabulous reading 🙂

Whatever you call them, the people you work with are a lot like family. Not just in in the sense of being prone to having loud alcohol fuelled arguments at Christmas (surely that’s not just my family?). But in the sense that you can’t choose them.

Regardless of industry or occupation all workplaces are made up of an eclectic mix of individual personalities that all need to find a way to accommodate each others quirks and perks.

The process is not always easy.

Big picture people are frustrated when their ideas for innovation are shut down by colleagues who can’t imagine doing things differently to the way they’ve always been done.

Neat Nancys are forced to co-exist with slovenly Susans.

You get the idea.

Then there are the challenges of sharing.

Communal kitchens are often a source of tension. No one will ever confess to being the owner of the festering Tupperware container in the back of the communal fridge – the one which has been there so long it requires a HAZMAT suit and safety goggles to remove it.

They also frequently end up as the scene of Mexican stand-off style confrontations over who owns the dish that’s been left to “soak” in the sink for three days running.

Office equipment and resources can also be fraught with conflict. No-one in the history of offices has ever wanted to be the schmuck who has to change the toner in the printer. People use the last piece of stationery and don’t put it on the list to be replaced. And then there are those people that are so uncoordinated that they can’t even seem to use a basic piece of office equipment without rendering unfit for further use…

Yep I broke the laminator. It says so right there on the sign….

I put something in to the laminator and for some bizzare reason NOTHING CAME OUT!

The best part about this particular sign is that I DIDN’T MAKE IT! After about 15 fruitless minutes of taking the damn machine apart and still not finding the document I stalked off in disgust. So to save everyone the bother of trying to work out who exactly had buggered the laminator, one of my particularly diligent colleagues happened to be around when the incident occurred and made it for me. Just in case anyone wanted to know who broke the laminator… IT WAS MEEEEEEE!

The upshot is that people have different standards.

But from the freakishly clean and tidy, to seriously dodgy and gross, all must learn to live together in some sort of harmony otherwise your workplace ends up resembling the shoot out at the last chance saloon.

In my current workplace we’re all pretty good *most* of the time. We don’t have anyone who’s really gross but I think we are probably all guilty of the occasional moment of absent mindedness when we forget to wash our teaspoon or re-fill the water dispenser.

And this is where signs come in.

Now don’t get me wrong. I have nothing against signs, and have even made the odd one or two myself in my time…

One of my former co-workers and I had a partition between our desks. Instead of constantly having to wheel our chairs around to speak to each other, we created signs which we could raise over the top of the partition to communicate with each other It was very effective as you can see…

I like to think I’m a fairly considerate co-worker. I wash up my stuff after lunch and generally try to leave all office equipment in the state in which I found it (apart from the laminator, obviously…).

But living in a smallish house with up to 5 children at any one time had given me shall we say, realistic, ideas about standards when large numbers of people have to share communal facilities. I definitely think everyone should do their best to be considerate of their colleagues but I’m not going to get bent out of shape over a slip here and there.

However some of my colleagues have higher expectations which they are certainly entitled to.

And recently there have been more than the usual number of instances where someone has used the last of a toilet paper in the ladies toilets and *GASP* not replaced the toilet roll!

Now since we’d had some extra casual staff in over this period it was impossible to pinpoint exactly who the culprit might be. But someone, and I’m still not sure exactly who it was, decided that something must be done. That someone needed to set the record straight about the standards regarding toilet rolls in this organisation. 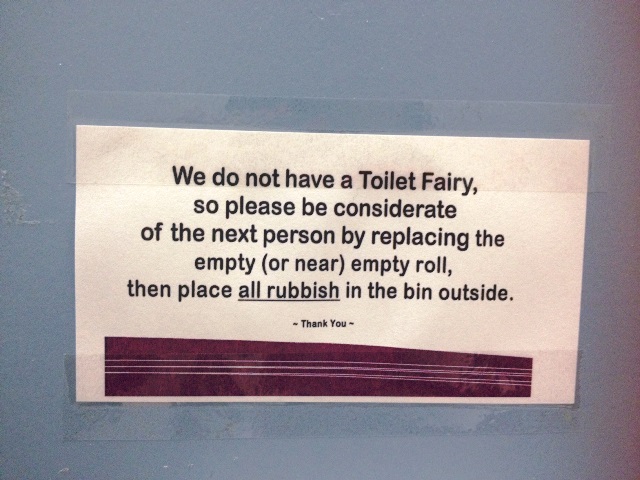 For some inexplicable reason this sign really spoke to me.

There was something about it that made me feel quite sad – as if by admitting there was no toilet fairy meant we were saying goodbye to the possibility of a little bit of magic in the world.

I decided this wouldn't do.

So I made this. And stuck it next to the original sign in both cubicles…

And hopefully now peace will reign in our communal facilities 🙂 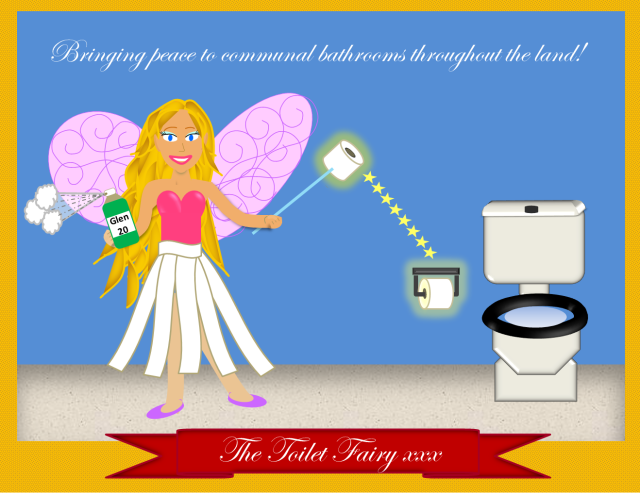