Linking up with The Lounge for the topic “Fashion Fails”

When I found out that Sarah from Slapdash Mama had chosen this as her theme my initial thought was “NNNOOOOOOO!!” quickly followed by “WWHHYYYYYYYY???””.

While I’m by no means a fashionista, I do think that in the last few years I’ve finally arrived at a place where I have a good idea of my own personal style. I know not all trends will work for me and I’ve learnt to take the elements I’m comfortable with and ditch the rest. I like to think the result is a safe version of whatever’s “in” at any given time. 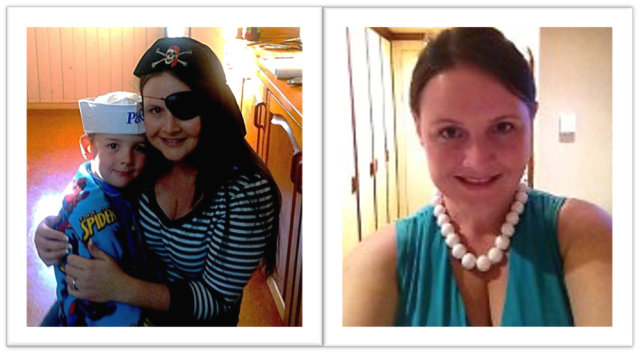 Me in the present. Dressed as a pirate in my role of Mother, and dressed to kill in my role as semi-retired party girl 😉

The journey to this place however has been fairly fraught with fashion disasters and I had hoped that evidence of these fails could stay hidden in the past along with my roller skates and Bros records.

But alas it was not to be.

The Lounge has demanded that I ‘fess up to my greatest fashion faux pas and as a Lounge Lizard I have no choice but to take a pill, pull up my big-girl pants and get ready to re-visit these moments of questionable style.

When I started rifling through the old photos I found evidence of fashion crimes from various stages of my life, so I have conveniently categorised them for your viewing pleasure

Now sit back, grab a martini (or maybe even something stronger- this is not for the faint-hearted) and allow me to take you on a Fashion Odyssey through my life from 1977 – 2013.

As you can see my younger sister and I should actually be claiming royalties from The Wiggles for providing the inspiration for their iconic skivvies. I hated these with a passion, as they were both scratchy and uncomfortable as well as hideous!

Skivvies Ahoy! The Wiggles looked to us for inspiration…

Now here we have two absolute classic 80’s fashion fails and I think I’ve executed them quite well, considering my tender age.

On the left we have the “double-denim” combo of denim jacket and denim skirt. But wait – I’ve teamed them with white ankle boots which propels the outfit into the stratosphere of fails.

And there on the right is me in my “material girl” get-up. I loved Madonna and thought her lace bow was the epitome of cool! 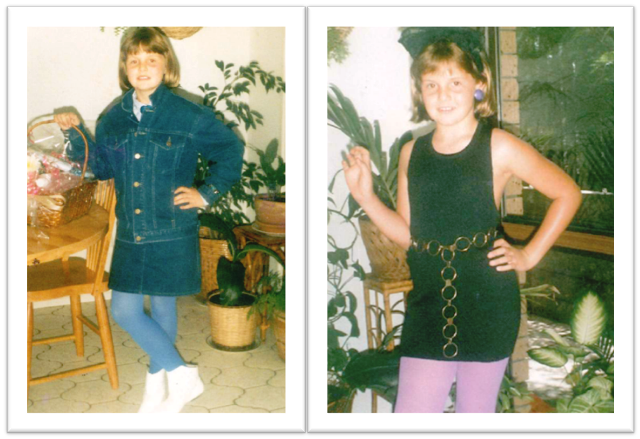 Check out the out the double denim/ white boots combo! And my Madonna inspired lace bow!

When I entered my teens I was introduced to the world of uniform-inflicted fails. Although they were completely out of my control they are still significant.

On the left is me the early 90’s Hungry Jacks (Burger King) uniform I wore for my part-time job. You can see in the photo I’m trying to give it some attitude but I’m not really pulling it off. That may be because it was 100% polyester and extremely gross to wear. It was like wearing plastic bags had been that fashioned into clothes.

I spent my teens as a choir girl by day and Burger chick by night!

On the right is me in my school choir performance outfit.

Yes I was in the choir. You can shut-up now.

In addition to the uniform check out my quiffed fringe! I used to render it absolutely immobile with hairspray and my family referred to it as “the dish” due to it’s resemblance to a Sky TV dish.

And this one is me on my 16th birthday. What you may not notice is that the top I’m wearing is actually a body-suit! For the uninitiated it was a shirt that was kind of like a leotard in disguise because you did it up under the crutch with press-studs. Classy AND functional no?

Thank god I stopped wearing them before I started drinking because the co-ordination required to do up press-stud in your crutch requires a clear head and a steady hand!

So I finished high-school and became an adult. HAHAHAAAA! No I certainly did NOT become and adult or anything even close to it for years and years.

What I did become though was a party girl. I took to night clubbing with a vengeance and as far as I was concerned the best night for going out was any night the sun went down.

This of course lead to some spectacularly LOUD fails. Everything in this era was too bright, too tight or too short, but hey what else do you wear when your whole life revolves around cutting a swathe through the Brisbane CBD in your platform shoes? Shoes which were so high they had their own name “The Towering Infernos”… 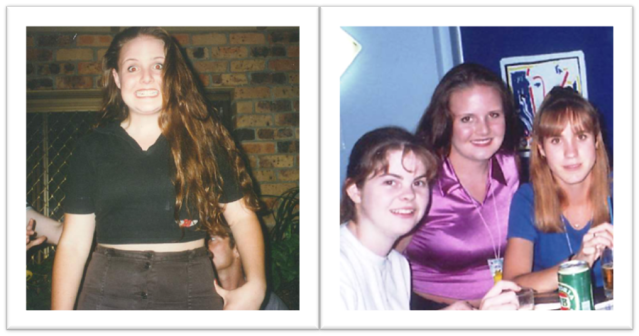 The peak of my night-clubbing days saw fashion fails aplenty…

On the left you’ve got a fairly mild fail – the mid-riff shirt isn’t quite doing the job and black and brown seems a strange combination. I also know (that you can’t see in this shot) that the skirt is very short – the kind where if you drop something you have to lower yourself down into the crouch position, as bending over would give the world a flash they could probably do without.

I don’t know what I was thinking.

Fuck, I don’t know what the MANUFACTURERS were thinking. But god help me I loved that shirt – and in this case love was most assuredly BLIND.

Let us just say that the words “mauve” and “lycra” should probably never co-exist in the same sentence and leave it at that shall we? Before our eyes fall out from the sheer glare coming off that thing…

I did a lot of travelling in my late teens and early twenties and let me tell you this era was fertile ground for fashion fails. It seemed whenever I left the country I left my fashion sense (and my inhibitions but that’s probably a topic for another post!) behind.

On the left we have me with a friend in Germany. The hat is red crushed velvet and I had bought it in Paris, where we’d been for the weekend. I LOVED this hat. Because I’d bought it in Paris I thought it made me look artistic and bohemian. In reality I looked like the type of mad aunt one might keep locked in an attic.

On the right I am sitting in a tourist trap restaurant in Istanbul. I at least have the sense to look mortified in this one. The hosts made you wear the full kit and my mate took the photo while we were waiting for them to bring us a hookah pipe.

All serious travellers wear hats. No really, they do…

And here I am in Thailand on the way home from my 3 year working holiday in the UK. This trip was my last hurrah as I was heading home to be sensible and go back to uni.

On the left you can see me and my mate Mark in our fetching tourist beer shirts. In fairness this was when they’d first come out (around 2000) but even still they’re pretty daggy and do absolutely nothing for me fashion wise.

On the left you can see I’ve gone for the obligatory hippy hair-wrap thing-a-majig. I had really long hair down to my waist at the time and balked at getting the Bo Derek style braids that a lot of the other girls were getting. I don’t know what I’m pointing out to Connor (an Irish fella we’d met with his fiancé Jo-anne while travelling) but it looks far out man!

Fails of my Twenties

By the time I hit my mid-twenties most of the really big fails were behind me. But not entirely as is evidenced by these fetching fails…

On the left is me fire-twirling! Yes I am a woman of hidden talents 🙂
But my fire twirling costume leaves a lot to be desired. Leopard print shirt teamed with blue floral bikini bottoms which are poking out the back of my skirt – that’s a pretty major pattern clash!

I should join the circus!

On the left is me on my first night out after having Jack. I was clearly a bit “out of it” fashion-wise. I think we can all agree that pale pink is really not my colour. I look like bacon – if bacon could stand up and wear shimmer eye-shadow.

And that’s the end of my Fashion Odyssey!

You’ll notice I haven’t really included anything from my more recently history. That’s not because I haven’t worn any regrettable outfits. On the contrary I am 100% sure I have! It’s just that not enough time has passed for their true horror to become apparent.

Because in the end it’s really time that makes these fashion outfits “fails” rather than “fierce”. I remember how much I loved that mauve lycra shirt of my early twenties. How many of my go-to outfits of today will make me cringe in 10 years time?

So I’ll see you all back here in the year 2023! We can catalogue the fails of 2013 as well as those yet to befall us. I bet it will be just as much fun the second time around 🙂

Thursdays in The Lounge – it’s a “come as you are” kind of place!