Linking up with The Lounge this week for the topic of Travel Tales.

I consider myself extremely fortunate to have done a significant amount of travelling before children and responsibilities blessed my life.

But this post is not about one of the many amazing places experiences during my travels abroad. No, no my friends. The story for today’s post takes place slightly closer to home on a family holiday to the… uhhhm … *exotic* port of…

For those who are not Queenslanders Bundaberg is a reasonably sized town in on the central coast about 5 hours drive from Brisbane. It’s known for Bundaberg Rum and … sugar cane and… rum, really.

Why had we chosen Bundaberg for our family holiday?

Well apart from the rum there are also some very nice beaches in the area, some of which are home to one of the southern hemisphere’s most popular turtle nesting grounds!

It’s also located at the very southern tip of the great barrier reef so provided an opportunity to take a day trip out to some of the coral islands and do a bit of snorkelling.

We embarked on this holiday in January 2011, during the wettest summer ever. In fact it was about two weeks before 1/3 of the entire state was devastated in the Queensland Floods.

So it was wet – really wet. The Rum Distillery was already underwater by the time we got there which was a great disappointment to Brook who was looking forward to indulging in a few of his favourite tipple straight from the source.

But despite this we were having a good time.

When I’d planned this holiday 6 months previously I’d had the foresight to pre-book two of our holiday activities ahead of time.

The first was going to see the turtles nesting at Mon Repos, a beach slightly north of Bundaberg.

It was magical. We walked down the beach in the pitch black and then up into the sand hills. There right in front of us was an ENORMOUS loggerhead turtle who had just finished digging a deep hole in the sand. The rangers had positioned a light behind her, at the business end so to speak, and before long was laying she hundreds of eggs that looked just like Ping-Pong balls. 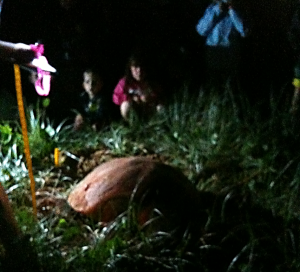 Ok so this is not the greatest photo but the brown lump in the foreground is an actual TURTLE laying eggs! And you can just Max (aged 3) in the background on the left looking extremely serious 🙂

I must admit I felt for her a bit, what with everyone peering at her during labour, but she seemed completely unconcerned by either the light or the crowd. Like I said… magical!

The second activity was a day cruise out to the Barrier Reef.

On the website it looked picture-postcard perfect – white sand and crystal clear water. We would be able to visit the coral island, go snorkelling and lunch was included. As I typed in our credit card details I basked in my motherly efficiency as the ultimate holiday planner.

Little did I know that smugness goes before a fall.

The day of the cruise arrived and we excitedly boarded the “Spirit of 1770”. A reasonably sized catamaran, the boat wasn’t new but it was pleasantly fitted out and comfortably sat about 70 people. 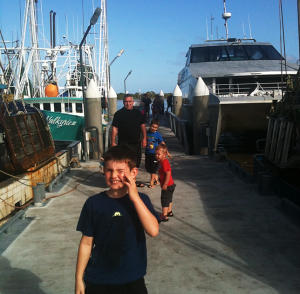 Just sit right back and you’ll hear a tale, a tale of a fateful ship…

The trip from out to the Island took 2 hours and it was pretty rough. We all felt pretty green and Oscar and Max (aged 6 and 3 at the time) eventually fell into a nauseated sleep.

Poor Jack (nearly 8 at the time) was not so lucky and vomited on and off most of the way there. However being a hardy little creature he perked up almost as soon as we anchored and proceeded to devour and hearty lunch and declare himself fit for the tour of the Island.

The day could not have been more perfect. We explored the island, went in a glass bottom boat and mucked around with some obliging sea cucumbers…

From left to right…
Jack playing with a sea cucumber, Max in the glass bottomed boat and Oscar playing cast-away on the beach

Then finally it was time to head back to Bundaberg.

Because Jack had been so ill on the way out we had enquired about giving him one of the sea sickness tablets that were available from the kiosk on board. The staff had advised that they were recommended for children from 8 years of age.

Jack was 7 at the time but he was turning 8 in about 6 weeks. Plus he was, and always had been, a big unit. Tall for his age and built like a front row forward (which he now is).

Brook and I had a quick chat and decided that it would be ok to give him half a tablet so half an hour before we were due to leave he swallowed it down.

We all settled into our seats and prepared ourselves for another rocky ride.

Taken just before we started the journey back to land, Max is already a very worried looking squishy. Note also Jack in the background looking rather spacy.

I think we’d only been moving for about 3 or 4 minutes when the first wave caught us.

The boat tilted at an alarming angle as we travelled up, up, up one side of the wave. Then as we crested the top the boat plummeted straight down and hit the valley left by the wave smack on the catamaran’s flat bottom.

The whole boat shook and I felt the first spike of terror surge through me.

One of the little girls sitting across the aisle immediately began to scream hysterically – ear piercing shrieks that she was in no way in control of. Max and Oscar were sitting in between Brook and I and were just as terrified.

I looked over at Jack siting on the other side of Brook. He seemed fine – he certainly wasn’t sick but neither did he look particularly frightened.

Thus began a nightmarish cycle that would continue for another 3 and a half hours. Up, up, up we’d go, only to come crashing down with an almighty bang seconds later.

Then the vomiting started. All around us adults and kids alike began heaving up the prawns and salad we’d all had for lunch. There was no shame – we were all scared and sick and social conventions could go fuck themselves.

Stoic looking staff carted away full bags and replaced them with fresh ones over and over again.

We were doing pretty well – both Max and Oscar had thrown up but we’d been ready with the bags. Then the staff came around with lolly-pops – apparently they can help kids take their mind off being sea-sick.

That may have been the case for some children but it certainly wasn’t for Max. No sooner had he put it in his mouth than he started to vomit. This time I wasn’t quick enough with the bag and he vomited all over my leg and in between the where the two of us were sitting.

I was so paralysed with fear by this point I didn’t even care.

It was at this point I looked over at Jack. He must have felt me looking and he looked back at me.

Unlike everyone else on the boat Jack did not look petrified and green with nausea. On the contrary he was smiling.

“Jack, buddy are you OK?” I asked, slightly concerned.

“MUMMY! DID YOU SEE THE WAVES? THEY ARE COMING RIGHT OVER THE FRONT OF THE BOAT!!!” he answered in an excited voice.

This was true. Sometimes when we crashed down the other side of the waves the impact would send spray crashing over the front of the boat. Just one more layer of fear to add to the seventy million layers already in place.

“LOOK MUMMY! SOME OF THE WATER IS COMING RIGHT IN THE DOOR OF THE BOAT. ISN’T THAT COOOOOOL?”

And then I realised… Jack was STONED! The sea-sickness tablet had stopped him from getting sick but it had also sent him straight to la-la land. 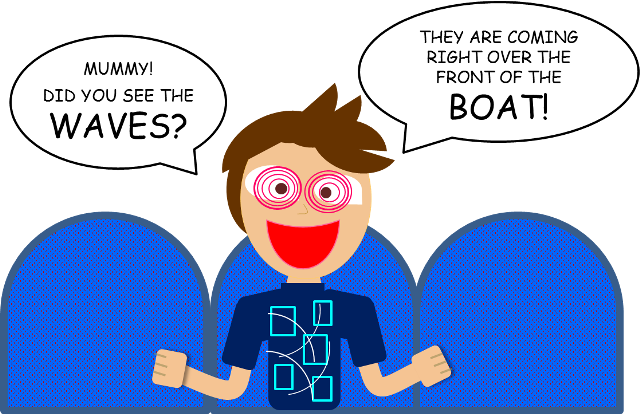 Suddenly I realised… Jack was STONED!

As Brook, Max, Oscar and I huddled together in abject misery, Jack sat with his feet up on the seat in front of him and happily watched the waves break over the front of the boat.

He was having the time if his life.

Some of his other delightfully “out of it” exclamations included…

To which the answer from all of us was a resounding NOOOOO!

We obviously made it back safely in the end and I have never been so pleased to see land before or since.

37 comments on “Bundaberg and The Bumpy Boat”